In the summer of 2020, an artificial floating island appeared in an old defensive fortification place called Jonas hill in Klaipėda city center, Lithuania. From a distance, it could be seen by all the visitors of Jonas Hill or the residents of the surrounding houses. Residents of Klaipėda and city guests could rent water bikes and get closer to explore the island.

The island is build using original Biomatrix technology (total area 24m2), transported from Scotland to Lithuania, assembled and planted locally. Klaipėda municipality supported this initiative and provided possibility to monitor biological diversity in the habitat; in future the island will be used for water quality improvement and creation of natural river habitats at the same location. Such islands are extensively used in different cities around the word as part of the green infrastructure of the city to revitalize green areas and to contribute to societal needs for the development of sustainable cities. Floating islands as part of city green infrastructure provide the opportunity to observe and get to know nature as islands create habitats for birds, insects, aquatic fauna and support natural colonization in the very city center. Water plants develop strong root system, easily grow and bloom on artificial island platforms. When attached to the roots, the bacteria remove nitrogen (as atmospheric gas) from the water during nitrification / denitrification processes, decompose organic matter and perform detoxification. This increases water transparency, reduces microalgae growth and water blooms. In addition, the island contributes to the containment and transport of suspended particles to other bodies of water and, ultimately, to the sea. 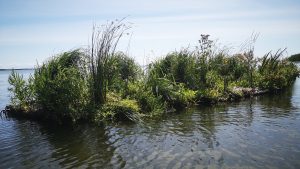 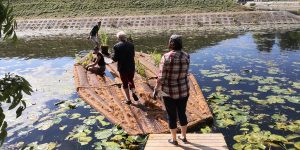 The nutrient removal efficiency of islands depends on the area of the island. Nutrients are stored in the aboveground plant biomass and roots, and removed by microorganisms and sedimentation process. According to the data of the LiveLagoons project, a similar island installed in the Curonian Lagoon in Gintaras Bay (Juodkrantė) removes 10.3 g N and 0.5 g P / m2 in aboveground plant biomass per year. Assuming that aboveground biomass accounts for only 10% of nutrient removal efficiency, we can estimate that 24 m2 of island removes 2472g of N and 120g of P per year, and about 7kg of nitrogen and 0.4kg of phosphorus in 3 years.

The first attempt to build an island in an urbanized area proceeded with surprises. In less than five minutes after the installation of the island, it was visited by a family of ducks. We later counted up to 16 ducks resting and feeding on the island. Unfortunately, the ducks, not finding enough suitable vegetation for food, did not shy away from tasting exotic plants in the urbanized environment of Jonas Hill. As a result, some plant species have completely disappeared and the aesthetic image of the island has been affected. In 2021 spring, as a continuation of the LiveLagoons project, it is planned to replant the plants, taking into account the duck’s “menu”. 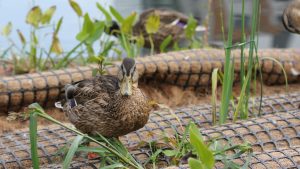 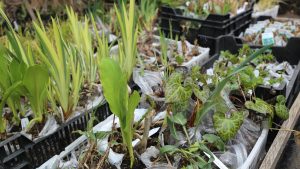